How Prolotherapy Saved My Life

My best friend and I are enjoying the last free day before my senior year of high school. He, having graduated the previous spring, is driving his mom's car. We drive by the high school as the freshman, who start a week before the older grades, are getting out. We're preparing to turn left at a 4 way stop; the car directly across from us has gone through the intersection, so my friend begins his turn.
At the same moment, 81-year old Marie D. decides to run the stop sign at between 20 and 30 mph. Her minivan hits the passenger corner of our front end - the corner I am occupying - hard enough to throw us both into the windshield, fling my glasses off my face, and puncture her radiator.
Marie broke her toe. She also broke my back.
I'd run cross country the year before and had signed up to run again, but I found practices too painful and quit the team. Everyone assumed I had whiplash and sure enough, the pain seemed to reside after awhile. It wasn't until I developed bronchitis that winter and had chest x-rays that we discovered I had two wedged compression fractures in my thoracic vertebrae. They'd already started to fuse. There was nothing that could be done.

My back and neck pain have continued to increase in duration and severity. Some days I'm in so much pain all I can do is weep. By now whenever I have x-rays the doctors turn the film over and over, as though there's some mistake, and call their residents over to exclaim over my damaged physiology. My neck is straight as a post. A chiropractor tells me that I have poor posture and probably osteoperosis, and that I'm living (at age 25) in the body of a 50 year old woman who has experienced skeletal trauma. My GP starts me on Celebrex, Flexeril, and Vicodin. A bone density scan reveals I have osteopoenia and that my skeleton is roughly that of a 40 year old woman. He says my neck pain is due to the now fused compression fractures, that if the accident had happened this year they would have the tools to fix it, but that my only option now is a $62,000 surgery to separate those vertebrae. It's a gamble - there's a 50/50 shot it will make my pain worse. He says it's inevitable that I will be crippled, likely in the next 20 years, and I should live every single moment until then.

I get a phone call at work from a local chiropractor. They're canvasing for new patients; if I bring in 2 cans of food I can have a free adjustment and x-rays. Having fallen off my horse the week before, I figure I can use an adjustment. Anyway, I enjoy the look on doctor's faces when they see my spine. I fill out the intake forms (always a pleasure with a body like mine), have my x-rays, and return the following afternoon for my results.
Doctors wear a lot of masks - saccharine to cover an uncomfortable experience, interested when their minds are elsewhere, calm when they're confused - but I hadn't seen the "this is really more serious than I sound" look directed at me before. My neck is backwards. The technical term is severe kyphosis; other labels I'll now be plastered with are degenerative disc disease, cervical stenosis, and neuropathy. All this time people have been worrying about my back, when in reality it's my neck that has been rapidly worsening.
I am advised not to get on anything with speed and to drop most physical activities. Three months later, after adopting a dependable horse who has no inclination to go fast, I am prohibited from riding at all. In addition to my retinue of painkillers and anti-inflammatories I begin chiropractic treatment three times a week. My insurance only pays for 12 visits a year. My neck is now costing me over $200/mo.
I have my first MRI. It shows, in clear detail, how the bones in my neck curve backward, how at the apex of that curve I have bone spurs forming to collect a bulging disc, and how those spurs and that disc are pressing on my spinal cord. They're shorting out my central nervous system. This accounts for the numbness, tingling, tics, tremors, and pain I've been feeling in my extremities (but ignoring). I can look forward to incontinence, paralysis, loss of motor function, and possible organ failure.
May 9th I was normal. May 10th I'm a cripple. 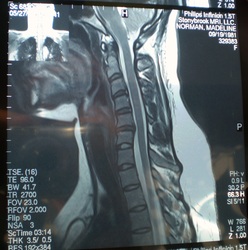 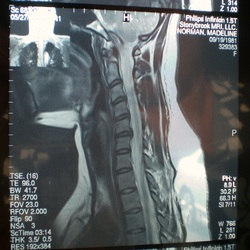 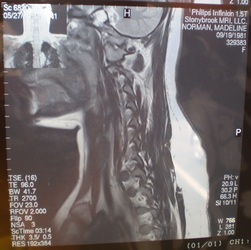 The chiropractic treatments were not working, and the doctor didn't listen when I told him I felt worse, so I discontinued them in January. I've been to a neurologist; he was extremely rude and unhelpful. My GP increases my Flexeril to 3x/day. At that dose I would be a drooling, incoherent zombie around the clock! I am barely functional on one a day, taken before bed. Periodically I black out, walk into walls, lose motor function, and enjoy nerve pain. My GP refers me to a neurosurgeon.
The neurosurgeon is AMAZING! He is truly understanding, compassionate, reassuring, funny, honest, and interested. He orders another MRI and adds Neurontin to my litany of drugs. We discuss performing a discectomy and fusion to take care of the problem disc.
The MRI shows I now have 3 bulging discs, despite limiting my physical activity. Surgery is no longer an option. There are 8 vertebrae in the cervical region, which means almost half my neck is compromised. Fusing one disc limits the range of motion somewhat, but in my case I wouldn't be able to move my head at all. Additionally, fusing those vertebrae would start a domino effect, and all my discs would eventually slip. The answer is disc replacement, which is approved by insurance for the lumbar and thoracic region but not for the cervical region. (They don't believe it's a better option than fusion, which proves that corporations, or any large group of people, get dumber the more money they have.) I will have to tough this out for an estimated 2-3 years before the surgery will be approved.
Now remember, I've tripled my problem in just 11 months! Last May I had one bulging disc. Now it's 3. Where will I be in 3 more years?!
I'm sent to a pain clinic to have an epidural steroid injection. I wait 3.5 hours for a 3 minute procedure, then another 30 mins. before I am allowed to leave. The steroids make me angry and fat. They don't resolve anything.
The Neurontin works beautifully. My hands stop shaking, I stop walking into walls, I feel...normal. Except I don't. All the drugs used for nerve pain also affect the part of the brain associated with depression. Under the influence of Neurontin, I begin to tell everyone - my best friend, my parents, people I work with - that I am going to buy a specific shotgun for the purpose of putting it in my mouth and pulling the trigger. I calmly and thoroughly research the best methods, angles, and approaches for doing so. It takes me a couple of weeks to figure out why I feel this way. When I inform my neurosurgeon that I've stopped taking the death drug, he switches me to Lyrica.
I have mixed emotions about Lyrica, which is four times more expensive than Neurontin and doesn't seem to work at any dose. While it doesn't perform as well as Neurontin, it also doesn't give me any side effects, but I stop taking it because a) it's expensive, b) the benefits do not balance the cost, and c) it was pulled by the FDA about 3 years ago and the ads still sound pretty sketchy.
My neurosurgeon changes Flexeril to Skelaxin, which is more expensive but doesn't knock me out. He also gives me WONDERFUL pain patches, Flector, which are $15/each after insurance but work so well they're worth it! He sends me to physical therapy twice a week. The therapist teaches me a number of stretches and exercises and experiments with ultrasound, massage, and the TENS unit. Nothing releases my muscles, and we make moderate progress over 3 months in relieving my pain.

The Cost of Masking  Sickness

Three months of physical therapy is all my insurance will cover. The neurosurgeon is out of ideas. I'm so drugged most of the time I don't know if I'm coming or going. I can't remember anything. I can't participate in many activities. I have no energy and I'm in constant pain, which keeps me from getting a full night's rest. I am fat, angry, sore, scared, frustrated, lethargic, and hopeless.
In relating this to a friend, I learn that she had similar issues a few years ago. I marvel at the fact that she is able to lift and play with her two children. She credits prolotherapy. Prolo-what??? I ask. It's another series of injections, but unlike steroids these are natural and will not break down tissues. A 50/50 dextrose (sugar) solution is injected into the affected area, causing an inflammatory response. Basically, the body says, "There's a problem here! Send help!" Having been raised in Oregon, I'm a fan of any natural treatment, anything that uses the body to heal itself. And the upshot is no drugs, which my body doesn't tolerate well. The downside is most insurance companies consider prolotherapy an experimental/alternative treatment, so it's $250 out of pocket every time. Number of sessions depends on your body's reaction and progress.
I go to http://www.getprolo.com to find the nearest provider. My insurance company says they'll pay provided it's deemed a necessary medical expense, so I get a referral from my neurosurgeon, who has never heard of this treatment. At my consultation I am deemed an excellent candidate for prolotherapy, hooray! I can expect 10 days of inflammation followed by a healing process during which I will begin to feel better. The goal is to rebuild the connecting structures that hold my vertebrae in place. Right now my muscles are attempting to keep the bones from grinding on one another and slipping out of their natural position, which is really the job of tendons and ligaments. Additionally, we hope these structures will begin to move my neck forward, back where it belongs, which will diminish the effects of the bulging discs and prevent future damage.
I ask if I will be able to ride after these treatments. The doctor tells me that if it works, I can do anything. I will not carry any greater risk than anyone else, because my body is HEALING ITSELF instead of coddling the problem.

The Cost of HEALING

Did prolotherapy cure me? No. My neck will never be "normal". There really is no "cure". But prolotherapy has made significant, measurable improvements in my range of motion, energy levels, neuropathy, disc degeneration, pain and discomfort, physical activity, and overall well-being. And if my symptoms return down the road, I'll do it again without hesitation, because it is a natural treatment with no harmful effects. Prolotherapy gave me back my life.

UPDATE 09/01/12: I have been 10 months drug-free with no treatment besides an hour massage every three weeks! I am able to ride Bullet without issues. I can swim! I don't fall down anymore. THANK YOU DR. BERTRAM!